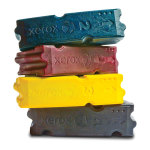 Solid ink printers are a quite interesting technology solution, which was presented by the Tektronix Company in due course, and now have gone to the Xerox company.

Here’s the diagrammatic representation the main components of the solid ink printer: 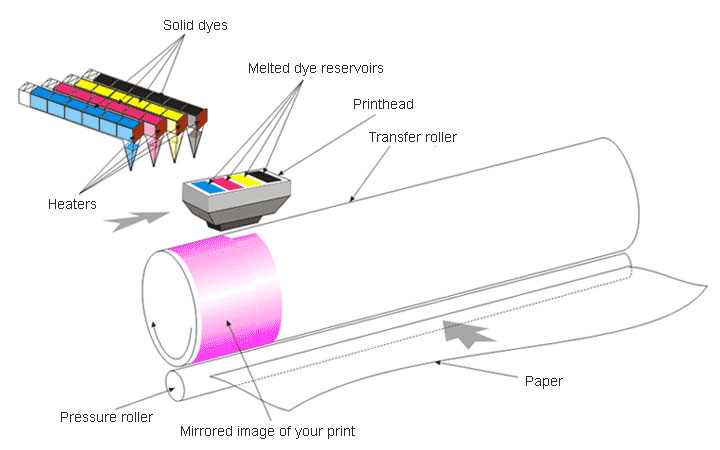 Printer of such type uses a piezojet printhead as a printing element. It moves along the transfer roller, which is rotating, in it its turn. While it is rotating and the print head is moving, the roller’s entire surface is getting covered with the mirrored image of the future print. When the image is composed on the roller, the paper is supplied to a printer and the image from the surface of the roller is transferred to the paper, where it remains after as an imprint. 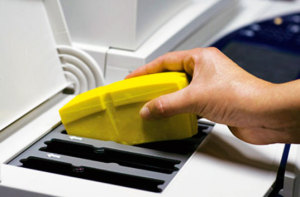 The most interesting thing here is a dye. It is colored waxy bars. They are laying in four rows according to the CMYK color scheme and these bars are spring-loaded. When the work starts, the heater, which is placed at the end of each row, is melting this bar of dye. After that, the melted dye is reaching reservoirs placed on the printhead. These reservoirs are constantly heated, so the dye remains liquid. Further printing process is pretty much the same as with usual ink-jet printer: the dye is fed to the jets through channels, and then the dye shoots out due to the piezoelectric effect. The transfer roller is also constantly heated, so the dye that is on it will also stay liquid, and reach the paper in liquid form. The diameter of the transfer roller is the same as the maximum allowable print page length: that means, the image is printed in a single roller revolution. The image is transferred to the paper by pressing the dye up against the paper, and that is done by pressure roller. The dye instantly solidifies on the surface of the paper and the final image is composed.

Advantages of this technology are quite obvious: since they are built on the ink-jet printing base, printers are giving an opportunity to produce images of the highest quality. Because of the dye viscosity it is impossible to have drops of the small size, like in the modern ink-jet printers, but even those drops that you can get out of this printer, are definitely enough to get the best results. Printers using this technology, make it possible to get very rich colors and quite thick filling (snap traps). The image then looks glossy and elegant. Since the carrier is not being heated, you have the ability to use quite thick and heavy carriers, and even plastic. 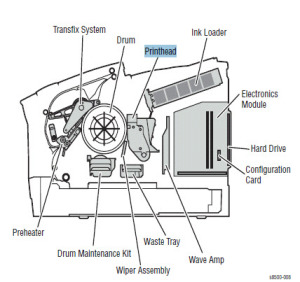 Unfortunately, there are disadvantages as well. The first one is the print instability to the physical influence. I’ll remind you that the dye is basically waxy substance, and it can be easily scratched right off the paper. Also, the bad thing for your print is the intense heating. The image will “melt” in laminator, it won’t hold. The same thing might happen due to the summer sun rays (for example if you have forgotten your print inside of your car and left it under the sun). The image may partially exfoliate due to the long contact with another piece of paper (for example if your print is in the folder, which is lying in a stack of documents). One more major disadvantage is due to the technology peculiarity: you never shutdown the printer. If you shut it down, then when you start it next time, the printer will drain everything what is left in melted dye reservoirs, to the waste container, and that happens because when the dye gets solid and then becomes liquid again, it loses appropriate printing features. The dye loss, which happens each time you turn your printer on, makes buying a powerful UPS economically viable, with the help of which you will prevent the possible printer shutdown because of the failure of the power supply: 3-4 shutdowns cost pretty much the same as a cheap UPS! And the last but not least, these printers have no alternative fillings, what makes it impossible to reduce printing costs.

Considering that the technology is constantly developing, and the things mentioned above are based on the earlier printer models which are using this technology, I want to show you what does the one of the most active users of Phaser 8550, whom is known at thematic forums, thinks: