The carousel color type is another type of the printing engine, which is different from the single-pass type.  Single-pass systems are more expensive to produce than the carousel system. And they are. Since there’s a separate laser scanner in the single-pass systems and each individual cartridge has all the associated security. And there’s only one for each cartridge in the carousel system. Maybe it is not as complicated as a single-pass system, but the process still includes quite a few interesting things to look at. All cartridges, and there are four of them, are being held by the carousel. It rotates depending on which cartridge is needed at the moment. While the technology is developing, this kind of a system is usually used in cheaper printers. For example, HP CLJ 1500 and 2500 are pretty similar to the HP CLJ 4500, but the first ones are more advanced. 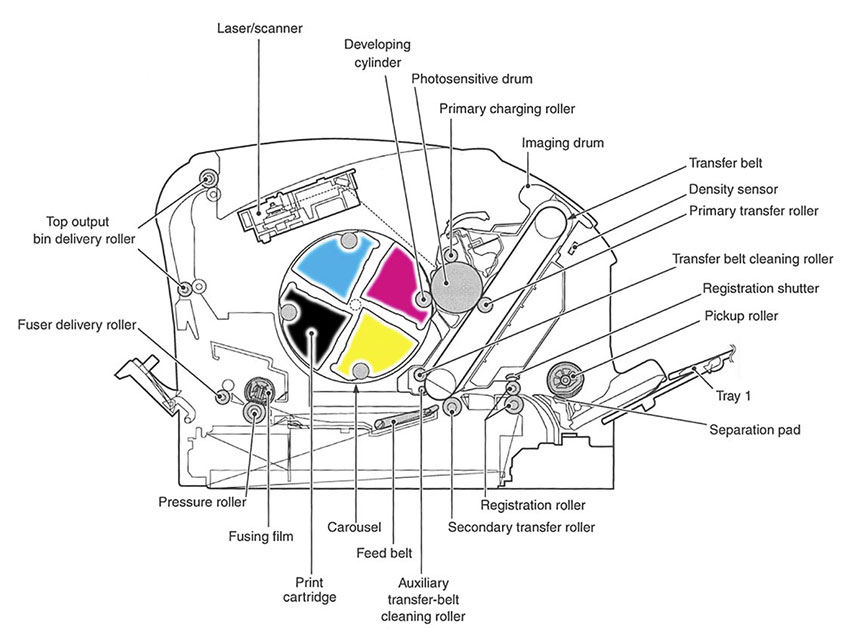 The printing process of the non-magnetic cartridge is best shown step by step. First, the PCR places a negative DC voltage on the surface of the OPC drum. Printer’s intensity setting then allows you to control the amount of the placed voltage. 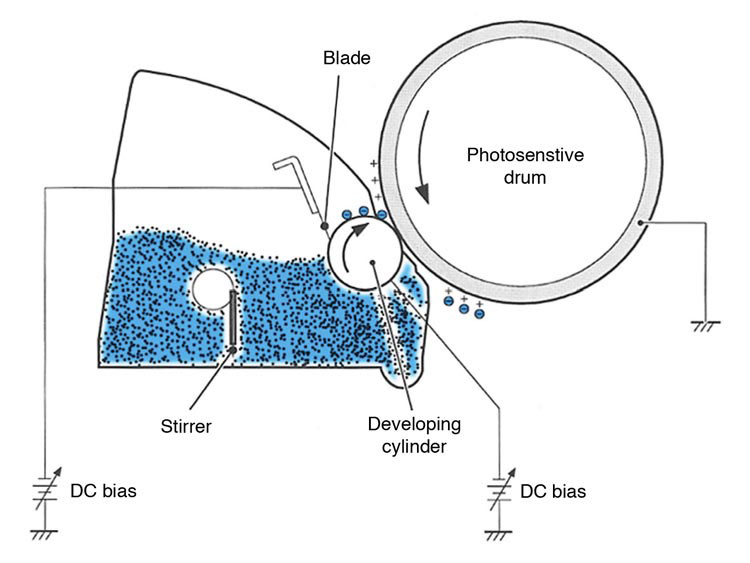 The second step, the imaging section, is when the “scanner” or the rotating mirror is being fired by a laser beam. And then the beam is reflecting on a set of lenses, while the mirror rotates. And then the beam hits the surface of the drum and leaves the electrostatic image on it. Those areas which were not impacted by the laser will have the negative charge retained. 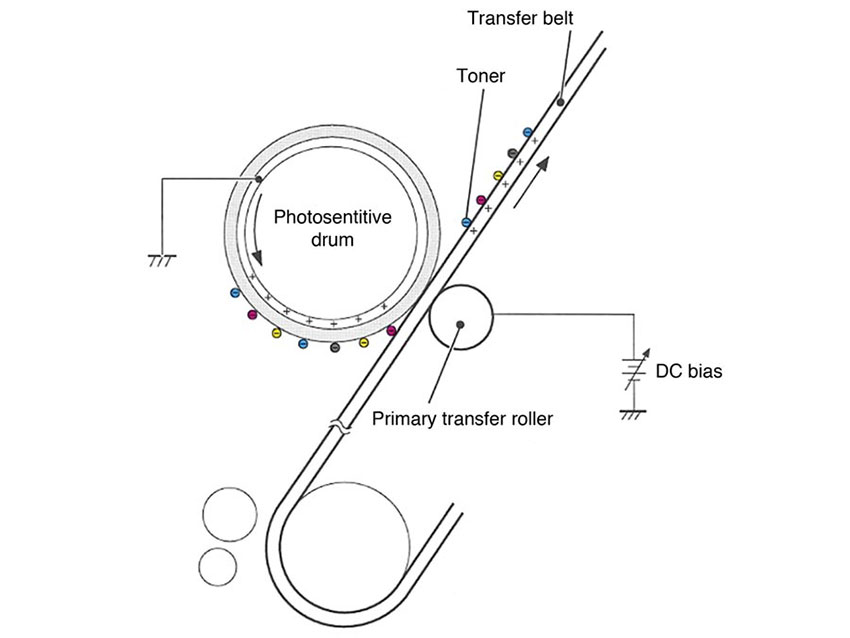 The fourth step is the primary transfer. And this is the main difference between the HP CLJ 2500 and HP 4600, or monochrome printing process. The first thing here is transfer roller placing the positive charge on the back of the transfer belt. After what, the toner that is negatively charged is going to the transfer belt that is positively charged. For each color needed the process is repeated again. The voltage is increased for each new color, and that helps the toner to stay in the right place on the surface of the belt. 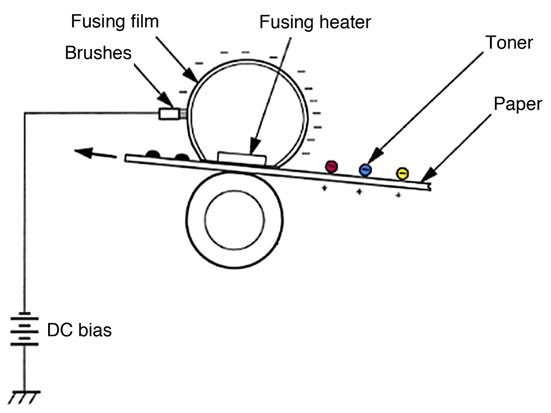 The sixth step is when the fuser assembly fuses image on to the surface of the paper. The fuser assembly is comprised of the two halves, the lower and the upper fuser rollers. The paper sheet is then passed through the soft rubber roller that presses the paper up to the upper heated roller, which melts the toner into the paper sheet. Upper heater is a flexible sleeve with a heating coil inside. This kind of a fuser allows instant-on fusing, and requires less power. There’s also a DC bias voltage placed on the sleeve, which allows holding the toner to the paper firmly, so it is not scattering. 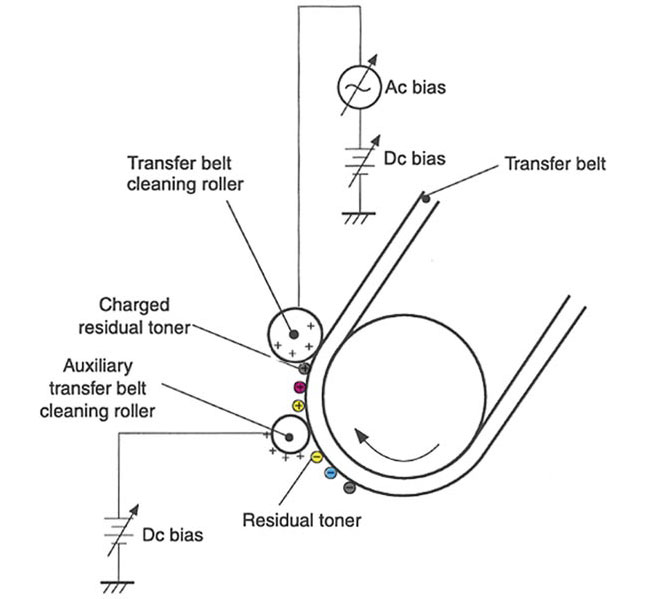 The seventh step is cleaning the transfer belt. The belt is cleaned each time you turn your printer on, when you have your printer’s covers closed, when starting a printing, when you’ve printed a certain number of pages. A positive DC bias voltage is placed on the transfer belt cleaning roller. And that helps the toner to stick to the belt and not fall inside of the printer. Next, placing the DC bias on the cleaning roller. And this charge is stronger than the one previously applied by the auxiliary roller. Previously positive charge now becomes negative. The difference between the drum and the belt is produced by placing another DC bias on the transfer belt. The cleaning roller of the OPC drum gets another DC bias. And that causes the residual toner to transfer onto the drum. 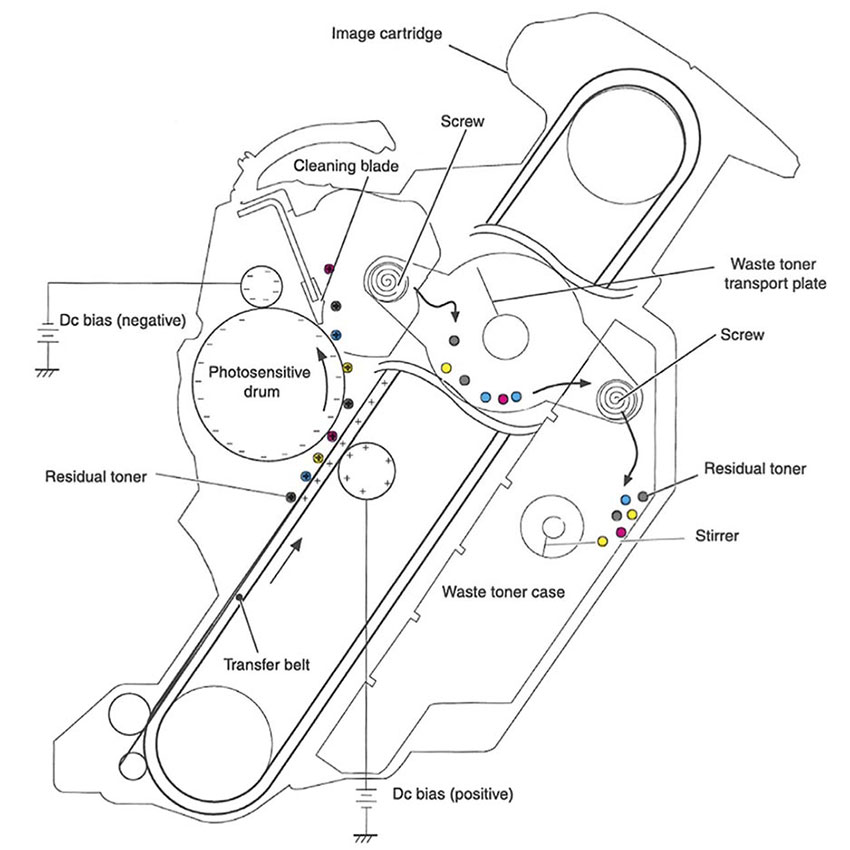 The last step is the cleaning of the drum. The drum is cleaned by the wiper blade each time the process described above ended. There’s nothing new in this process: the wiper blade cleans off the toner from the surface of the drum, and then the cleaned off toner is guided to the waste reservoir by the recovery blade. What’s different here is the movement of the toner and the waste toner case. Then the auger picks up the waste toner from the drum unit. The toner is then delivered to another auger and after that is moved to the waste toner case.  This case is a compartment of the transfer belt.

Now you see that DC power supply has lot things to do during the process. So, even the small deviation in power supply may cause serious problems.

CALIBRATION OF YOUR PRINTER

Before anything starts there’s a cycle of calibration. Each time you turn the printer on, or when you install a new toner cartridge, or at specific page intervals, or when the printer has reached 8 run-time hours, printer will calibrate itself. To calibrate itself, the device is printing solid blocks and halftones of each color. And when these printed pieces reach the top of the belt, there’s a sensor to detect them, to calculate the density, and adjust printer settings as needed.

Reset chips are working in the same way that all other HP chips do. These chips are controlling notification messages TONER LOW, TONER OUT or REPLACE CARTRIDGE. There’s a separate chip for each individual cartridge. It is unnecessary to replace the chip for the cartridge to work. But should you not, you will have no notifications about the toner left. When you have your chip utilized, you need to clear it by pressing the CANCEL button. After that you will see the “NON-HP PRINT CARTRIDGE” message. You’ll see it only once. There will be no information about the cartridge on the SUPPLIES STATUS page.

Non-magnetic color toner. This toner is used in new generation of HP color systems. These color toners are chemically grown, polymerized toners. Unlike the usual pulverized ones. Because of the extremely round particles, polymerized toners cause less wear, and allow you to calibrate the color more accurately. These toners use almost no powdered iron. Some have no iron at all.

Waste chamber. It is the place where all of the wasted toner is stored. This part of the cartridge usually contains the drum, charging roller, recovery and wiper blades. In the HP 4600 there’s also a bar for the primary exposure LED.

Supply chamber. It is the place for the new toner that is not yet used. This part of the cartridge contains the doctor blade and the magnetic roller assembly.