According to the history, the first paper was made by Cài Lún, Chinese eunuch at Eastern Ho Ti Han Dynasty in AD 105. Most probably mulberry bark was used, and the paper was made using bamboo laths mould.

The most ancient paper preserved was made out of cloth scraps in AD 150. During the first 500 years the paper was produced only in China, but as early as AD 610 production goes to Japan and about AD 750 it reaches central Asia. The paper came to Egypt in AD 800, but the production started only after AD 900. 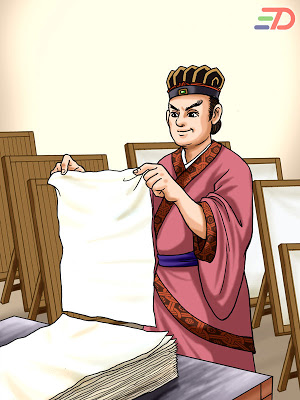 In Europe, first people who used paper were Moors, and the first paper production had place in Spain somewhere in 1150. In following centuries this kind of the craft spread in the most part of Europe countries. When the movable type came in XV century it contributed the development of book printing which in turn greatly stimulated paper production. In England, first paper-mill appeared in 1495, in US in 1690.

The only acceptable source material for paper production, which was known at that time in Europe, was cloth scraps, and in XVII and XVIII centuries this ever-growing use led to the shortage of these materials. At the same time people were trying to find some replacement for this material, but it seemed nothing was appropriate from the commercial point of view. Besides, people were trying to cut the production costs, by inventing the device that would substitute the hand forming process that was used for paper production back then. The first machine that was successfully applied practically was made in 1798 by the French inventor Louis-Nicolas Robert. After that the machine was improved by British office supplies dealers, brothers Sealy and Henry Fourdrinier, who made their first machine in 1803 that was named after them. Cheap material for paper production was found in 1840th, when the process of making cellulose out of the wood pulp was invented, and a decade after the process of cellulose chemical production. 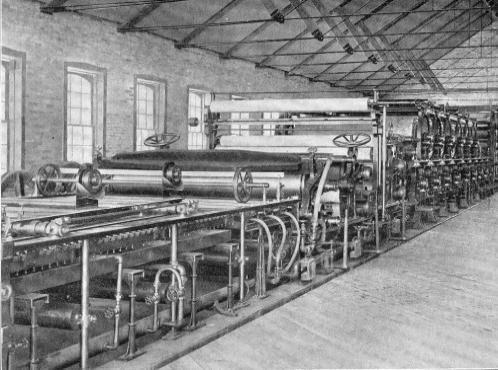 Over more than 2000 years the basis of the paper production process haven’t changed. It consists of two stages: grinding the raw material in water to form the suspension of individual fibers, and forming the canvas out of these fibers by spreading the suspension on the appropriate porous surface, so the surplus water could drain.

During the hand paper production, the raw material (straw, leaves, bark, cloth or some other fibrous material) is placed into a tank or a washtub and pounded with a hard pounder or a hammer to separate the fibers. At the initial stage the material is bathed with running water to remove any foreign impurities, but when the fibers are pretty much separated they are left in suspension state and the water is not changed after that. At this stage, the fluid material that is also called half-stuff is ready for the real paper production. The main tool of a paper manufacturer is a mould – armored gauze sheet that has a structure of square cells, so called wirewove, or it can be the structure formed by more thin longitudinal wires which are connected together with thin cross wire, so called verge (laid paper). The structure of the mould is impressed on the finished paper sheet and that’s why the hand-made paper is of two types – wirewove and verge – depending on the mould that was used. The mould is placed inside of a replaceable wooden frame that is called deckle and the deckle forms a small board around the net. After that the mould and deckle is placed into the washtub filled with half-stuff; when the mould and deckle is extracted from the washtub, it is covered with the thin film of fibers and water. After that, manufacturer shakes the thing vertically and horizontally. This shaking makes double effect: on the one hand, due to the shaking the mixture is spread evenly on the surface, and on the other, individual fibers interlace with each other, what gives the canvas appropriate strength. When shaking, the major portion of water in the mixture is drained through the cells of the mould. After that, the mould with the canvas is put aside and dries until it is tied so the manufacturer could take off the deckle. After the deckle is taken off the mould, it is turned upside down and the paper is laid onto the woolen fabric, woolen cloth. The other cloth is laid on top of the paper and process starts over again; this process of re-laying the paper with cloth is called gauching. When the large stack of paper with cloth appears, it is placed in a hydraulic press and subjected to a pressure of 100 or more tons, thus removing most of the water which paper contains. Then the sheets are separated from the cloth, put in a pack and pressed. Compression of the paper stack is repeated several times, and each time sheets in the stack are folded in a different order so that individual sheets turn to be in a new position in the reference to each other. This is called a permutation, and the process of repeating improves the surface quality of the finished paper. The final stage of paper manufacturing is drying. Paper is hung on a clothesline in a special drying room in groups of four or five sheets and remains there until almost all the moisture evaporates.

Paper for writing or printing requires further treatment after drying, because without this treatment it will absorb the ink and the letters will be blurred. This treatment consists of sizing paper by immersion in a solution of animal glue, drying sized paper and final pressing operation between sheets of metal or smooth cardboard. Number and press force determine the structure of the surface of the finished paper. Grades of paper with a rough surface are pressed with a light load in a relatively short time, and with a smooth surface – with a heavy load during long time.

One thought on “History of paper”