Working in the service of printing equipment we often have to answer customers’ question regarding unlocking of printers. This situation is quite normal and ordinary user doesn’t always understand why is it necessary to reflash the device, moreover if everything worked fine before without it.  Many of them not believing that printer reflashing is a necessary procedure and not understanding that the cartridge can’t be refilled without unlocking see in this a hidden background and a desire of the companies to earn more money. Since the fact that more and more similar issues appear every day we diced to puzzle out this situation once and forever.

Progress marches forward by leaps and bounds and we get more and more modern high quality equipment from the assembling lines of such giants as Samsung and Xerox. As the level of competition in the market is growing the cost of devices is gradually declining. It certainly makes us, customers, happy but makes manufacturers nervously smoke aside. It is not surprising that such a situation makes manufacturers find new ways of making profit, one of which, for example, is selling of consumables. It’s necessary to give due to the diligent marketers, they perfectly do their job, guys eat their bread not for nothing! As a result, what we have today, buying modern high-quality printer, let it be for three thousand rubles, we at heart thankful to the manufacturers and engineers with horror remembering the times when most mean device could cost all of thirty thousand! However, over time, the euphoria passes and this happens when you find out that you have to throw out the same three thousand for the cartridge for this miracle of engineering thought! 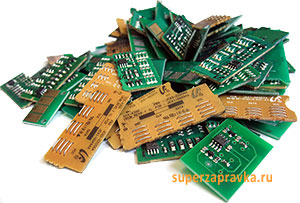 All brillian – easy! So in our case, the manufacturers decided not to reinvent the wheel and began, selling the printer at undervalue, earning on consumables to it. Again, having begun losing the lion’s share of the profits manufacturers have sounded the alarm and urgently started inventing new means of resistance. One of the most common methods of fighting for their piece of pie is to equip consumables (cartridges) with special chip. Chip is a miniature electronic device, the task of which is to record in its memory the number of printed by the cartridge pages. Once long-ago chips also existed but they played a purely informational role, allowing the users to track the current status of consumables, planning their early replacement or recharge. More recently, the situation has changed not in the favor of consumers. Today chips are unrelenting guards, day and night protecting the interests of manufacturers! Now they are entrusted not only to perform informational function but also to protect.

In simple terms, when the cartridge is out of toner, chip immediately blocks the operation of the printer, not allowing to make prints or copies. And don’t think that if you refill the cartridge the problem will be solved, the ill-fated locked chip will not tolerate a peaceful life. To remedy the situation you just need to replace the chip. However it’s easy to say when in fact everything is different. Every year the manufacturers become more and more insidious and invent advanced chips. Current situation is such that compatible chips for replacing simply don’t exist, since they can differ by tricky architecture, including the use of super crypto-processors, which are virtually impossible to replicate. Thus, the issue was resolved in another way – by modifying the software of the devices. Stock software is modified so that the printer is operable despite the absence of a chip in the cartridge. This operation is enough to be carried out one-time, in the future you can simply refill the empty cartridge.